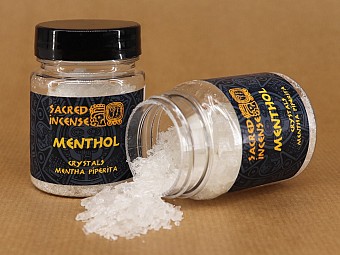 Of the members of the Mint family under cultivation the most important are the several varieties of the Peppermint (Mentha piperita), extensively cultivated for years as the source of the well-known volatile oil of Peppermint, used as a flavouring and therapeutic agent. Our menthol is in the form of small spikes of pure crystals.

Of the members of the Mint family under cultivation the most important are the several varieties of the Peppermint (Mentha piperita), extensively cultivated for years as the source of the well-known volatile oil of Peppermint, used as a flavouring and therapeutic agent.

Pliny tells us that the Greeks and Romans crowned themselves with Peppermint at their feasts and adorned their tables with its sprays, and that their cooks flavoured both their sauces and their wines with its essence. Two species of Mint were used by the ancient Greek physicians, but some writers doubt whether either was the modern Peppermint, though there is evidence that M. piperita was cultivated by the Egyptians. It is mentioned in the Icelandic Pharmacopoeias of the thirteenth century, but only came into general use in the medicine of Western Europe about the middle of the eighteenth century, and then was first used in England. Peppermint is one of the oldest herbs used in medicine.

The characteristic anti-spasmodic action of the volatile oil is more marked in this than in any other oil, and greatly adds to its power of relieving pains arising in the alimentary canal. The essential oil has a strong antibacterial action. One of its main constituents, menthol, is antiseptic, antifungic, refreshing and anaesthetic on the skin.

Peppermint is said to be excellent for the digestive system, decontract internal muscles, lowers nauseas, and colitis. Its antispasmodic action on the colon is efficient in the case of a diarrhoea as for constipation. From its stimulating, stomachic and carminative properties, it is valuable in certain forms of dyspepsia, being mostly used for flatulence and colic. It may also be employed for other sudden pains and for cramp in the abdomen; wide use is made of Peppermint in cholera and diarrhoea.

The local anaesthetic action of Peppermint oil is exceptionally strong. It is also powerfully antiseptic, the two properties making it valuable in the relief of toothache and in the treatment of cavities in the teeth.

Menthol is used in medicine to relieve the pain of rheumatism, neuralgia, throat affections and toothache. Its said also to act as a local anaesthetic, vascular stimulant and disinfectant.

Rats dislike Peppermint, a fact that is made use of by rat catchers who, when clearing a building of rats, will block up most of their holes with rags soaked in Peppermint oil and drive them by ferrets through the remaining holes into bags.

Lamiaceae (Mint family). It is a herbaceous rhizomatous perennial plant growing to 30–90 cm tall, with smooth stems, square in cross section. The rhizomes are wide-spreading, fleshy, and bare fibrous roots. The leaves are from 4–9 cm long and 1.5–4 cm  cm broad, dark green with reddish veins, and with an acute apex and coarsely toothed margins. The leaves and stems are usually slightly fuzzy. The flowers are purple, 6–8 mm long, with a four-lobed corolla about 5 mm diameter; they are produced in whorls (verticillasters) around the stem, forming thick, blunt spikes. Flowering is from mid to late summer. The chromosome number is variable, with 2n counts of 66, 72, 84, and 120 recorded. Peppermint is a fast growing plant once it sprouts, it spreads very quickly.[1]

Peppermint typically occurs in moist habitats including stream sides and drainage ditches. Being a hybrid, it is usually sterile, producing no seeds and reproducing only vegetatively, spreading by its rhizomes. If placed, it can grow anywhere, with a few exceptions. Outside of its native range, areas where peppermint was formerly grown for oil often have an abundance of feral plants, and it is considered invasive in Australia, the Galápagos Islands, New Zealand, and in the United States in the Great Lakes region, noted since 1843.[1]

Among essential oils, Peppermint ranks first in importance. It is a colourless, yellowish or greenish liquid, with a peculiar, highly penetrating odour and a burning, camphorescent taste. It thickens and becomes reddish with age, but improves in mellowness, even if kept as long as ten or fourteen years.

The chief constituent of Peppermint oil are menthol (between 25% and 55%) and menthone (between 10% and 40%), but it also contains menthyl acetate and isovalerate, cineol, inactive pinene, limonene, flavonoides, triterpenes, and other less important bodies.

This is a natural product, used as incense or in perfumery, or as an ingredient of incense and other perfumery or potpourri preparations.
Some incense plants or products may have some history of other folklore purposes, but we offer this product for its use as incense. Not food grade, not for consumption.

Please read our Terms & Conditions before placing your order.