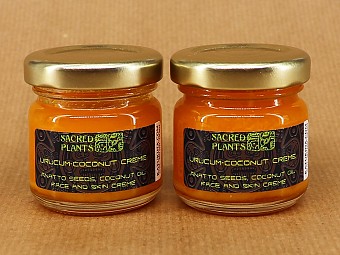 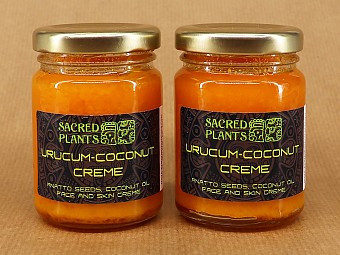 This creme is made using Coconut oil mixed with Urucum extract. Coconut oil has many health benefits for the skin and is excellent against irritations. Some other benefits are preventing premature ageing, protects the skin against cracking and creates a smooth skin, retains moisture, can heal wounds. This creme is great for face massage and leaves the face healthy nurtured with a slight orange hue/glow. It suits as a body bronzing and nurtures the skin and protects against sunlight like a sunblock. It is good for the whole body or parts exposed to sunlight. It can also be applied to the hair. It makes the hair shiny and masks grey hairs. When melted you need very little and it absorbs in the skin and does not feel fatty.

Urucum is made from the seeds of the Achiote (Bixa orellana) plant. It is a shrub or small tree originating from the tropical region of the Americas. North, Central, and South American natives originally used the seeds to make red body paint and lipstick, and was also used as a spice. For this reason, the Achiote is sometimes called the lipstick tree. The tree is best known as the source of Annatto, a natural orange-red condiment (also called "Bijol") obtained from the waxy arils that cover its seeds. The ground seeds are widely used in traditional dishes in Central and South America, Mexico, and the Caribbean, such as cochinita pibil, chicken in achiote and caldo de olla. Annatto and its extracts are also used as an industrial food coloring to add yellow or orange color to many products such as butter, cheese, sausages, cakes, and popcorn.

Traditionally Urucum was used against snakes and as an insect repellent.

Annatto seeds are collected from a relatively small tropical evergreen tree that grows 5-10 m high. The leaves are heart-shaped, glossy and provide an attractive background to the large bright pink flowers, which have the appearance of wild roses. Prickly, heart-shaped, scarlet seed-bearing pods form after flowering and, when ripe, split open to reveal a reddish-yellow pulp surrounding about 50 triangular, pyramid-shaped, indented seeds. Dried annatto seeds are about 5 mm long, look like little stones, and are a dark, red-oxide rusty colour. When cut in half, they reveal a white centre coated with the dusty, finger-staining red skin. The aroma is pleasant, sweetish, peppery and has faint overtones of old dry peppermint. The flavour is dry, mild and earthy(2). It is hardy to zone (UK) 10 and is frost tender. The flowers are pollinated by Bees (3). More detailed botanical information available here (4).

Coconut oil is an edible oil derived from the wick, meat, and milk of the coconut palm fruit. Coconut oil is a white solid fat, melting at warmer room temperatures of around 25° C (78° F), in warmer climates during the summer months it is a clear thin liquid oil.

The colour of Annatto comes from various carotenoid pigments, mainly bixin and norbixin, found in the reddish waxy coating of the seeds. The condiment is typically prepared by grinding the seeds to a powder or paste. Similar effects can be obtained by extracting some of the colour and flavour principles from the seeds with hot water, oil, or lard, which are then added to the food. Annatto and its extracts are now widely used in an artisanal or industrial scale as a colouring agent in many processed food products, such as cheeses, dairy spreads, butter and margarine, custards, cakes and other baked goods, potatoes, snack foods, breakfast cereals, smoked fish, sausages, and more. In these uses, Annatto is a natural alternative to synthetic food colouring compounds, but it has been linked to rare cases of food-related allergies. Annatto is of particular commercial value in the United States because the Food and Drug Administration considers colorants derived from it to be "exempt of certification".

Analysis of annatto seeds indicates that they contain 40% to 45% cellulose, 3.5% to 5.5% sucrose, 0.3% to 0.9% essential oil, 3% fixed oil, 4.5% to 5.5% pigments, and 13% to 16% protein, as well as alpha- and beta-carotenoids and other constituents. Annatto oil is extracted from the seeds and is the main source of pigments named bixin and norbixin, which are classified as carotenoids. Bixin, extracted and used as a food colorant, has been shown to protect against ultraviolet rays and to have antioxidant and liver protective properties in clinical research.