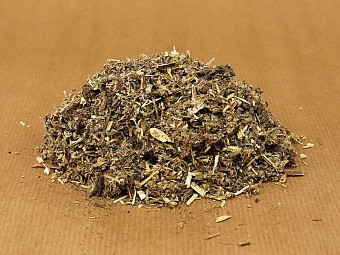 Mugwort is a common name for several species of aromatic plants in the genus Artemisia. Mugwort is also known as “Dreamweed” for its unique ability to stimulate dreams. It is renowned as a smudging herb for its subtle, sweet scent and dream-inducing qualities. It has a long history of use in the Pagan tradition and is still used in modern-day Pagan magical practices as incense and for smudging or spell work.

Mugwort is a common name for several species of aromatic plants in the genus Artemisia. Mugwort is also known as “Dreamweed” for its unique ability to stimulate dreams. It is renowned as a smudging herb for its subtle, sweet scent and dream-inducing qualities. It has a long history of use in the Pagan tradition and is still used in modern-day Pagan magical practices as incense and for smudging or spell work. With heavy smudging the effects of the plant spirit is noticeable and is sometimes referred to as "mild narcotic" in its effect. This mild trance state is perfect for scrying, divination, astral workings and vision quests.

In some magical traditions, Mugwort is associated with divination and dreaming. To bring about prophecy and divinatory success, make an incense of Mugwort to burn at your workspace, or use it in smudge sticks around the area in which you are performing divination rituals. Mugwort was also used in Anglo-Saxon Britain to cure people who had fallen victim to “elf-shot,” which appears to be a catch-all term used to apply to people who had become sick at the hands of evil spiritual entities. Sailors often smoked mugwort instead of Cannabis or Tobacco, and the plant came to be known as “Sailor’s Tobacco.” North American First Nation tribes used Mugwort leaves to rub on one’s body as protection from ghosts. They also wore necklaces made of the leaves to avoid dreams about dead people.

Artemisia, Ἀρτεμισία, referring to the Greek goddess Artemis who so benefited from a plant of this family that she gave it her own name. Plants described by Dioscorides and Pliny like Wormword or Mugwort from which the genus name Artemisia is taken. An alternative possibility for the derivation of this name is that it comes from Queen Artemisia II of Caria, sister and wife of King Mausolus, who ruled after his death from 352 to 350 BCE. and built during her short reign one of the Seven Wonders of the Ancient World, the Mausoleum at Halicarnassus, which she unfortunately did not live to see the completion of.

Artemisia vulgaris is used from way back to let recover tired travellers and to protect them against evil spirits and wild animals. Roman soldiers laid it in their sandals against painful feet, hence the name "bij-voet" in Dutch. William Coles (1626 - 1662 CE), an herbalist, botanist, became entranced by the idea of plant signatures. In the Art of Simpling, 1656, he wrote: "And if a Footman take Mugwort and put it into his shoes in the morning, he may go forty miles before noon and not be weary…". Dr. Karl Wilhelm Burdach (1781 - 1842) of Triebel, discovered that the root of the Artemisia vulgaris is an excellent remedy in epilepsy. Artemisia is used as food plant by the caterpillars of a number of Lepidoptera (butterflies and moths).

Mugwort is revered in Chinese Medicine, where they all it Ai-Ye & it’s used in moxibustion, done by acupuncturists for all sort of things but most commonly to move breech babies though i had it this morning to raise Qi. The word “moxy” comes from “moxa” which is the medicinal application of Mugwort to the Chinese meridians et al.

Mugwort (Artemisia vulgaris L.) is a perennial plant in the Asteraceae family. The plant is native to Northern Europe, and Asia; it can also be found in many parts of North America.

The Mugwort plant grows to 4 feet in height, but occasionally reaches heights of up to 6 feet. Its angular reddish-brown stems have bitter-tasting leaves that have a Sage-like aroma. The plant blooms with yellow or dark orange flowers in the summer.

The aerial parts of the Mugwort plant are used as an essential oil. The plant is also burned in moxibustion practices. In addition to its medicinal use, Mugwort has been used for smudging, protection, and inducing vivid dreams (when placed underneath a person’s pillow).

Historically, Mugwort was used by the Romans, who are said to have planted it by roadsides, so that marching soldiers could put the plant in their shoes. This was done to relieve aching feet. St. John the Baptist was said to have worn a girdle of Mugwort.

Mugwort can be made into a tea by adding 1.5 teaspoons of Mugwort leaves to a cup of boiling water (in a French press or tea infuser), steeping for 10 minutes then straining off the leaves and serving.

Mugwort is likely unsafe for people who are pregnant or breastfeeding. It may cause the uterus to contract, inducing miscarriage. Mugwort’s use has not been established as safe for infants.